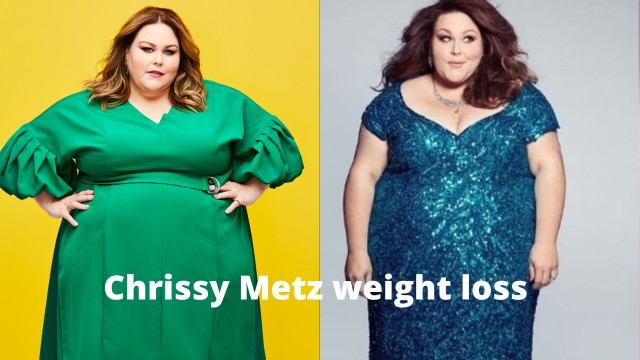 Christine Michelle Metz also known as Chrissy Metz is an American actress and singer who gained immense popularity for her acting skills as Kate Pearson in NBC’s tv series “This Is Us”. Apart from this, she is also known for her side roles in movies such as Sierra Burgess is a Loser, Breakthrough etc. She was nominated for various awards including the Primetime Emmy Award and the Golden Globe awards.

Almost everyone knows about Chrissy Metz’s achievements and her amazing acting skills but very know about her weight loss journey.

Indeed, Chrissy Metz lost a lot of weight. She went from being 226kgs to 181kgs within a short time period of less than 5 months. In total, she lost about 100 pounds within that given frame of time.

But the path of losing weight was not that easy for Chrissy Metz. It required extreme mental and physical strength to achieve something like this within such a short time period.

Her traumatizing past, never give up attitude and following a certain type of diet plan led to her weight loss.

According to Chrissy when she first read the script of “This is us” she found a lot of similarities between the character of Kate Pearson and herself. Chrissy Metz revealed, “Here was this woman who was actually dealing with weight”. In her interview with Hollywood reporter she further said “She was a real woman who was really struggling, and all I could think was, Oh my god, I’m Kate”. And this character of Kate Pearson indirectly motivated her to lose weight. In the series, Kate had to go through a lot of hardships. Similarly, Chrissy herself had to go through a lot of hardships in the past.

Chrissy was born overweight and she was pretty sure of the fact she would gain even more weight later. According to an interview, Chrissy said, “My friends could eat whatever they wanted to but I knew that as a kid if I ate certain things I would totally gain weight“.

Chrissy also had to deal with poverty since childhood. In an interview, she said that her mother never used to eat enough food but rather used to save food for Chrissy and her siblings. The road to weight loss was very tough. She mentioned, “I remember attending Weight Watchers when I was like 11 years old.” It was uncomfortable for me because I was the youngest person in the damned room. My mother was attempting to work everything out, but it’s a process that takes some time.

From the very beginning, there were problems in the family according to Chrissy. Her father left the family when she was just 10 years old. Later her mother married another guy who was sort of triggering in nature. Chrissy wanted to lose weight from the very beginning. As a result, she started attending weight loss classes. But this did not help her enough. Moreover, her stepdad mocked her immense weight and put on physical and mental pressure on her. Her childhood was never easy and consisted of tremendous bearing of mental and physical pain.

Before moving to LA as directed by her manager she lost about 50 pounds but later gained back 100 pounds again. According to her, she was into emotional eating. In an interview, she said, “Oh, I’m happy- let’s celebrate and eat. I’m sad? Let me eat my feelings.”

Later on, she had to face immense body shaming by her fans. She never reacted to them but killed them off with kindness.

All these factors led to the new Chrissy Metz who prefers to eat healthily and stay fit for the rest of her life. She is an extreme source of inspiration for all of us.

The weight loss journey of Chrissy Metz has never been easy. It took immense patience and killing off desires that come up in your journey. Although she wanted to lose weight right from the beginning, but according to her “your weight” should not define you. It’s your personality that matters more than how your look. Beauty is never associated with how fat or how thin you are. According to Chrissy Metz, she believed in 4 things that served as a motivation for her in order to shed 100 pounds.

Loving yourself is more important than anything

Chrissy Metz has always mentioned the fact that she used to love herself more than anyone. If you cannot prioritize yourself over anyone then how could you love anyone else? Even though she faced severe body shaming, demotivation and hardships she never stopped loving herself and considering herself to be perfect. Her weight loss journey was a success as she wanted to show people that everything is possible if you really want to do it.

On her 30th birthday, Chrissy was admitted to a hospital after an anxiety breakdown. This is the time she took up spirituality and meditation to break through this anxiety attack. Chrissy told in an interview “Meditation helped me to boost my confidence and motivated me to dive into my weight loss journey.”

Negative effects of being overweight

Chrissy Metz never wanted to lose weight rather she wanted to stay healthy by developing a certain fitness regime, eating healthy foods and staying focused. In an interview, Metz said, “Another thought crossed my mind, “What if I become so heavy that I am unable to move around or that I get stuck in the doorframe?” I said to myself, “I do not want this for myself.” She finally decided to lose weight when she learned about the various negative effects of being overweight. She went through various articles where she learned about how being overweight can cause high blood pressure, high cholesterol levels, diabetes and stroke in the near future. This was enough for her to opt in for this weight loss journey.

Chrissy’s traumatizing past helped her to become strong mentally. This intense mental strength helped her to leave tempting junk foods, and concentrate on healthy foods that will help her in achieving her weight loss goals. Infact there was an incident where Metz was rushed to the hospital in 2010 on her 30th birthday because she was having a panic attack and was suffering from melancholy at the time. That event served as the defining moment in her life from that point forward. She was always called “fat” from the very beginning and in order to show everyone that anyone can lose weight if tried the right way, she did it.

Chrissy Metz actually followed a specific calorie deficit diet for her weight loss journey. She used to follow a 2000 calorie deficit diet plan consisting of healthy foods that immensely helped her in achieving what she wants. In the beginning, before coming to LA, Chrissy lost about 50 pounds but later she gained about 100 pounds because of not following a proper diet plan.

Later, just like Doja cat, she understood this and hired a dietician that helped her in her weight loss journey. Both, her manager and dietician gave her enough confidence that she can leave junk foods and eat healthily. She concentrated on foods that are low in calories and carbs.

The main mantra for losing weight is spending double the amount of calories gained throughout the day. So the first thing she did was to limit the consumption of calories and carbs in her diet. She strictly started avoiding sugars, fast food, processed foods and sodas. According to several of her interviews, an assumption about her regular diet chart can be easily done.

This is the type of diet plan that Chrissy Metz used to follow that helped her to lose weight. Yes, the diet plan can never be the same for the entire week. So some manipulations were made. For example, sometimes she used to drink black coffee in the evening or sometimes she used to have grilled chicken at the lunch. To achieve her weight loss goals, she started limiting her food intake just like Aashika Bhatia.  In an interview, Chrissy said that when her heart was full she never felt hungry.

Chrissy Metz never discussed her weight loss workout plan in any of her interviews. So we can assume the fact that she was not into high-intensity workouts or exercises. Unlike, Kelly Doty, she never had a gym instructor. She used to concentrate more on keeping her calorie intake less so that her regular active life can shed off the excess amount of calories required to lose weight.

Did Chrissy Metz have a contract on “This Is Us” that required her to lose weight?

No, Chrissy Metz did not have a contract on “This Is Us” that required her to lose weight. However, she has been very open about her struggles with weight and body image and has said that she would like to lose weight for her health. In an interview with People magazine, she said, “I don’t want to be morbidly obese on television. I want to be healthy.”

Did Chrissy Metz have any Side Effects from Keto Pills?

There is no evidence that Chrissy Metz took any keto pills. She followed a proper diet which helped her to lose weight. However, as with any diet or supplement, it is always best to speak with a healthcare professional before starting any new regimen.

What’s next for Chrissy Metz?

Chrissy Metz began her career in 2005 with guest appearances on such television shows as Strong Medicine, My Name Is Earl and Entourage. She made her film debut in the 2008 comedy-drama film titled Meet the Browns. In 2016, she was cast as a lead character in the NBC drama series This Is Us and has since received critical acclaim for her performance.

In 2018, Metz released her first book, a memoir titled “This Is Me: Loving the Person You Are Today”. She is currently working on her second book, which is set to be released in 2019.

Metz has said that she would like to continue acting and writing books. She is also interested in producing and directing.

Overall, Chrissy Metz proved herself when it came to burning off fat and shedding extra weight. Presently, she follows a healthy lifestyle and concentrates more on her diet. She never went through any certain surgeries to lose weight. Rather her never-give-up attitude, focused personality and perfect diet plan helped her to lose enough weight. Her haters now praise her and follow her. Chrissy’s strong mental power and cutting down on junk cravings led to her incredible weight loss journey.