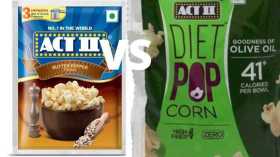 Be it movie nights on the weekends or on the weekdays the first that we crave has to be popcorn. Be it in your home or cinema halls you will definitely miss popcorn. Popcorn has been a part of our life for ages and especially when it comes to movies we will always have popcorn. So today in this article we will be reviewing the most famous popcorn brand in India, the Act II popcorn and also will be comparing the two varieties of Act II popcorn available in the market ( the Act II Popcorn Regular vs Act II Popcorn Diet ). So, let’s begin.

Act II Regular popcorns are very easy to make and take about 3 minutes. Act II is loved by kids and even adults all around India. We will be reviewing Act II Regular on the basis of their ingredients, nutritional value and will be determining if it is safe for health.

By analyzing the ingredients we get.

100g of Act II Regular popcorn provides you with almost 536Kcal of energy which is considered way too much. But yes, if you are sharing it with someone else then it can be considered safe.

3. A good amount of dietary fiber

100g of Act II Regular popcorn provides you with 9 grams of dietary fiber which is actually very good. This dietary fiber in this popcorn is generally derived from corn.

Palm oil also known as palmolein oil is used as an ingredient in this popcorn. I have already mentioned how dangerous palmolein oil is for our health in my previous articles. Palmolein oil is a cheap oil that has various side effects and is actually considered harmful for your health if consumed in higher amounts. Various brands generally use this oil to make their products cost-effective.

100g of Act II Regular popcorns contain about 800mg sodium which should be avoided by people with heart-related problems, kidney and even liver problems. It is also advisable for diabetic patients to cherish these popcorns occasionally and not on a regular basis.

Beta carotene also regarded as Vitamin A is found as an ingredient in the sachet which provides the yellow color in the popcorn and is not at all harmful to health.

160A is the added color in Act II regular popcorn which is again not harmful to our health. This color is generally extracted from carrots and is actually beneficial for your health. It prevents the risks of developing diabetes and also boosts your immunity power. But it is always recommended to consume anything in moderate amounts.

Act II Popcorn Diet is a newly launched variant of the Act II popcorn series and is being marketed aggressively. Act II claims this popcorn to be different from the Act II Popcorn Regular and is considered diet-friendly. Now let’s check the differences between both the popcorns.

1. Olive oil instead of palm oil?

The pack clearly mentions the presence of olive oil. But that does not necessarily mean that Act II Popcorn Diet does not contain palm oil. Instead, it contains both palm oil and olive oil. But as it contains a mixture of both oils the saturated fat content goes down from 14g to 11g compared to that of Act II Regular popcorn. The difference is not that remarkable and thus Act II Popcorn Diet cannot be considered better than Act II Popcorn Regular with such a minor difference.

Act II Popcorn Diet mentions 41Kcal of energy per serving in its nutritional information which is just 1Kcal less than that of Act II Popcorn Regular. Such a minor difference in calories can never be used as a valid point for determining the better one.

Act II Popcorn Diet does not mention the presence of any added colors which can be considered as a good point if compared to Act II Popcorn Regular.

As you can clearly see from the above points mentioned both Act II Popcorn Regular and Act II Popcorn Diet are very similar to each other in aspects of ingredients and nutritional value. This is nothing but a marketing strategy by ACT II to aggressively promote their new product over their old product. You will clearly find the mention of zero trans fat, diet-friendly and high in fiber in the packaging of Act II Popcorn Diet, but unfortunately the Act II popcorn regular also has the same things.

Coming to if you should consume these popcorns or not, the clear answer to this should be Yes, as it is not that harmful to your health. But the consumption rate should be moderate or occasionally and not on a regular basis.

BRB Popped Chips Review – Are these the healthiest chips?

Patanjali Atta Noodles Review – Is it good for health?